Introduction: The relationship between the intestinal microbial destabilization in Type 2 Diabetes (T2D) and reversal of dysbiosis via anti-diabetic treatment remains unclear, especially in old T2D patients. Methods: We performed an open, single-arm interventional study investigating the effect of IDegLira on the composition and function of the gut microbiota in a group of very old diabetic subjects. Forty participants replaced the pre-existing hypoglycemic therapeutic scheme, whatever it was, with or without insulin, with a single daily and flexible in time administration of iDegLira. The clinical protocol included 2 ambulatory visits, at the beginning of study (V0), and 6 months after switching therapy to iDegLira (V1). In each visit feces samples were collected. We also evaluated improvement of Quality of Life, changes in glucose metabolism, depression, cognitive function, level of independence, and markers of inflammation after 6 months. Results: Thirty-five patients (12 women, 27 men, mean age = 81.4 y) completed the protocol. However, for the metagenomic analysis we included only in twenty-four patients who properly collected feces samples in both study visits. Upon glycated hemoglobin (HbA1c) changes to IDegLira, we divided participants in “responders” (n=13) if, respect to V0 HbA1c, V1 HbA1c decreased 0.3% or more, and in “non-responder” all the others participants (n=11). We observed no significant differences between the “responder” and “non-responder” patients using the Shannon index. Moreover, the PCoA graph did not show any relevant cluster between groups. After a multiple test correction, the Alistipes genus was reduced in IDegLira “responder” patients while increased in “non-responder” patients (p-value=0.013, Figure 1). Linear regression analysis showed the higher abundances of Alistipes was significantly related with cognitive improvement evaluated with MMSE (adjusted r2=0.23, p=0.0005). Conclusion: Our results suggest a possible, until now unexplored, relationship between gastrointestinal tract microbes, GLP-1 agonism and cognitive function in very old TD2 individuals. 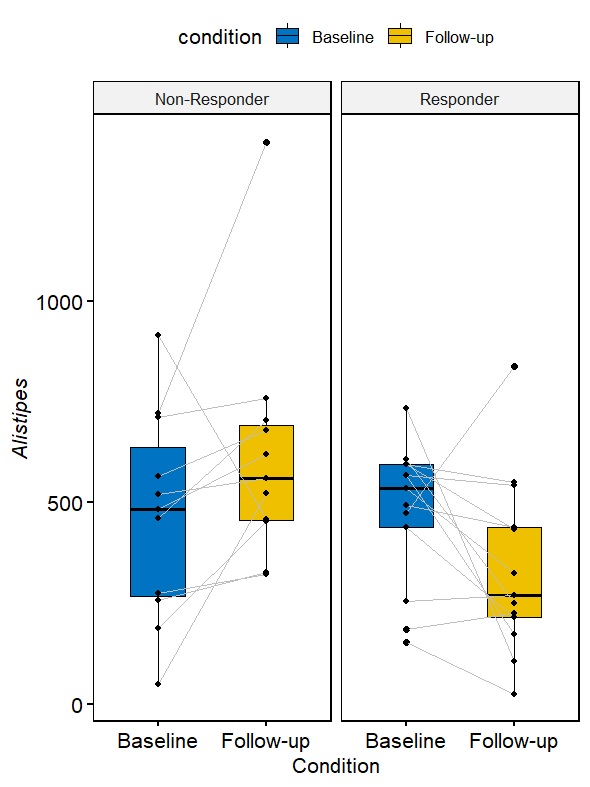